Mingei no Mori and Shizuo Honda 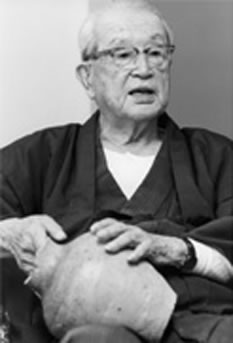 Mingei no Mori is the remains of the residence of Shizuo Honda who put much effort into sharing folk culture including the establishment of the Toyota City Folk Craft Museum and researching traditional Sanagekoyo pottery.
Mr. Honda contributed to development of the telecommunications industry and technology while researching ceramics as researcher in ancient pottery. In particular, he is known as one of the discoverers of the Sanageyama-Seinanreki-koyo (Sanage Kiln) remains and contributed to the development of local culture as he collected and researched valuable documents and artifacts. He was selected as an honored citizen in 1977 for his achievements.

Mingei no Mori is the residence Mr. Honda was living after the World War II. This oak grove hides rustic houses, ceramic komainu (lion-dogs), some of the oldest concrete telegraph poles in Japan and even more unique items. Oak is the symbolic tree of Toyota City. Mr. Honda’s collected ancient ceramics and folk craft pieces are kept in archives while his research and studies were performed at the laboratory.
Each year in spring, Mr. Honda hosted a Pottery and Cherry Blossom Viewing Party (Kanokai). Many people came to see his collection which was widely exhibited in public while Kyogen and other entertainments were performed at the stage and tea room, while dim sum and amazake were served.

Mr. Honda was born in Hanamoto-cho, Toyota city in January 1898. He graduated from Kyoto Imperial University (Kyoto University at the present day), majoring in Electrical Engineering in 1924 and entered the Ministry of Communication. He was the technical director of the East Asia Development Board of the Cabinet and the first director of Technology Board of the Cabinet in his career. He was spirited man performing well as a technical bureaucrat until his retirement in 1943, while he led the Engineering Campaign to improve the status of engineers.

He was active as an entrepreneur founding Nippon Denwa Shisetsu Co., Ltd. and FM AICHI BROADCASTING Co., Ltd. At the same time, as he started to be involved in tea ceremony, he found growing interest in ancient ceramics. He was inspired when he met Tokuro Kato the potter and eventually became one of the most famous ancient ceramics researchers and collectors in Japan. He also contributed to renaissance of folk culture collecting various folk culture documents such as enku-butsu and held a tea ceremony once a year at Meiji-mura. He supported many artists through collecting paintings of Kenkichi Sugimoto who he had a good friendship with, and other pieces of local painters and potters. 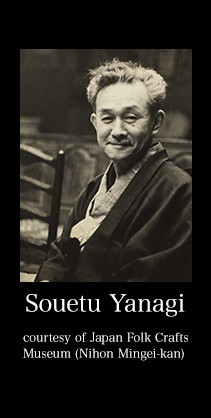 Folk Culture（Mingei）
Muneyoshi Yanagi, Kanjiro Kawai and Shoji Hamada issued the prospectus for the Foundation of Japan Folk Art Museum to start the Folk Art Movement.
The characters in the Japanese word “Mingei” (Folk Art) expresses the people and civilian with Min (people), arts and crafts with Gei (Art) which together meaning the arts and crafts of the people.
Muneyoshi Yanagi focused on the value of handcraft which was not known as a subject of arts before. He discovered that there is rich value of the beauty of everyday and the beauty of usage in cheap popular goods crafted by obscure craftsman which used to be called getemono such as dishes and clothes for daily use and tools for work such as farm tools or fishing tackle, and found a fair development for arts and crafts.